Preserving natural heritage and biodiversity has become a major stake and societal challenge on a global scale. Faced with the devouring effects of ever increasing human pressure and global changes that have become inescapable, everyone has a moral duty to act, even to fight, to protect and preserve our natural heritage and pass it on intact to future generations. The efforts to be made in favor of the protection of our natural heritage and biodiversity can only be based on a better knowledge of the natural environment and of nature itself, summarized in the somewhat concise formula "Knowing better to better protect”. 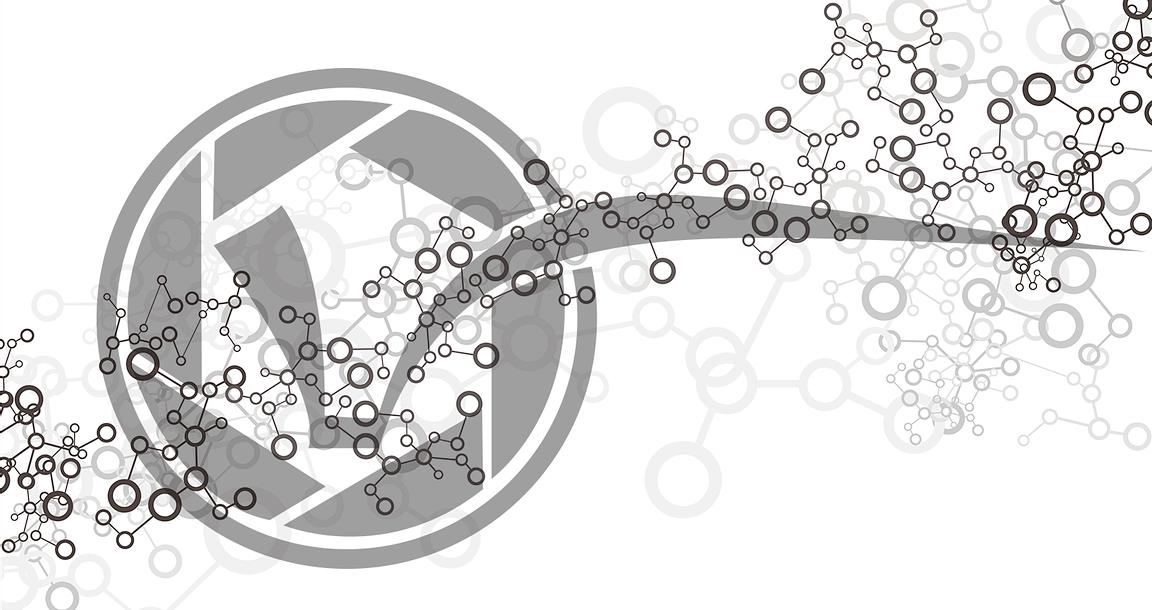 From this perspective, coral reefs should be considered as high priority ecosystems. They contain 80% of the world's marine biodiversity and at least 25% of the global marine biodiversity and constitute the founding socio-economic pillars. Their heritage importance in the overseas territories of overseas France cannot therefore be discredited or underestimated. However, little is known about these coral ecosystems, particularly in the parts of the deepest and most difficult to access reef slopes (the "mesophotic" zone). Their preservation is both an effort to improve our understanding through the use of innovative techniques, increased awareness and a wide dissemination the ecological knowledge acquired. 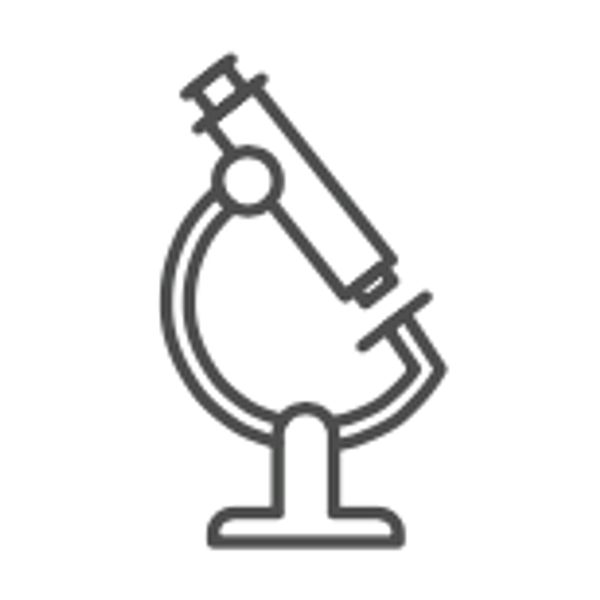 to identify and characterize 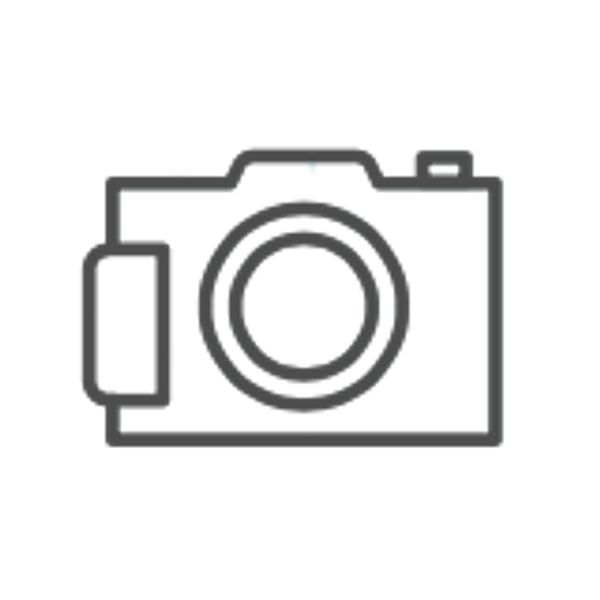 Build an inventory of the biodiversity of the Mahorais ECMs. The photo-identification method is preferred because it is respectful of the environment (non-invasive).

Sampling of organisms can be planned when identification is not possible for additional morphological and / or genetic analyzes. 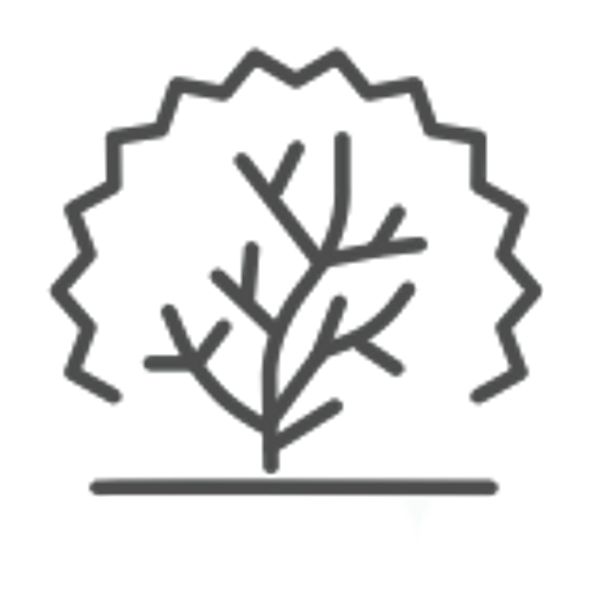 If a coral reef is exposed to stressful environmental conditions, its fate is determined by two ecological mechanisms affecting key functional species of its flora and fauna:

Resistance: The ability of organisms to withstand high environmental stresses without physiological modification or stress.

Resilience: The ability of organisms to recover from a state of physiological stress caused by environmental disturbance. In a more pessimistic scenario (high mortality), the fate of a reef will depend on its recovery capacities, namely its ability to repopulate. 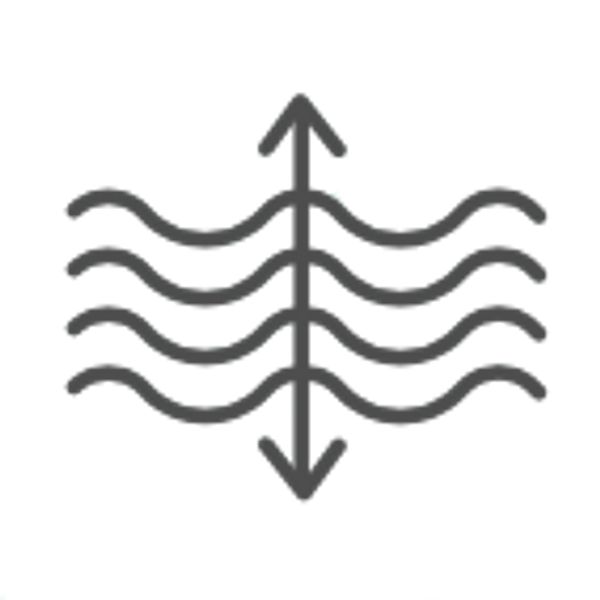 The potential for connectivity and nursery between ECMs and surface reefs requires simultaneously addressing the link between the environmental changes along the depth gradient and the acclimatization / adaptation capacities of the fauna.

With this in mind, DBE aims to set up a network of permanent wildlife monitoring stations. Surveys will be carried out using an innovative multidisciplinary approach combining various cutting-edge techniques in photogrammetry, genetics, functional biology and environmental monitoring.

BASICALLY, A SUBSTANTIVE PIECE OF WORK !!!! 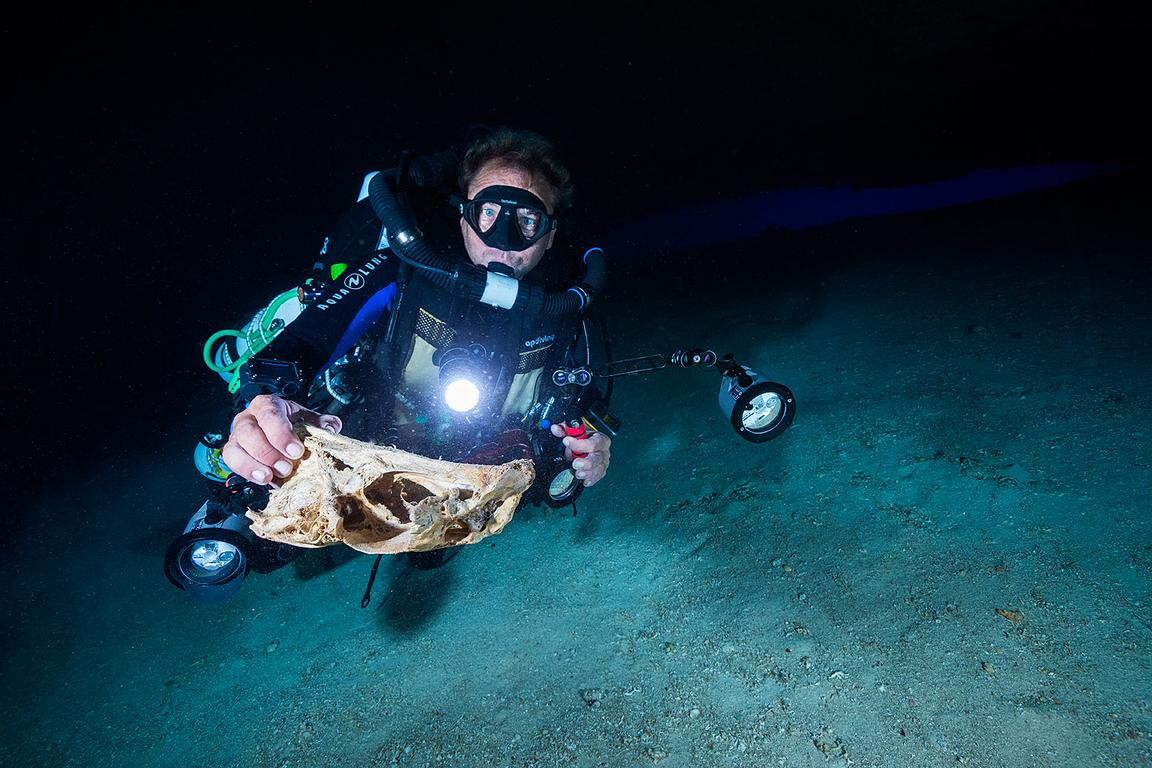 Discovery of a skull of an unidentified species 70 meters deep.

DBE divers carry out several missions during their immersions in the mesophotic zone. The information collected is then processed and analyzed by the association's scientists. The photographs, measurements and samples are taken in consultation with the scientists of the association in order to meet the requirements of the research programs in the best possible way.

Photo identification is one of our main activities during our deep dives. Identification work carried by scientists and taxonomists of the various specimens encountered is facilitated by the high definition of our cameras and the quality of our photos far superior to that of ROVs. For more than 2 years now, our image bank of several thousand photographs has enhanced and enriched the data collected on the mesophotic zone. Some species that we have photographed seem new to science, or in any case never recorded in the geographical area. Others, highlighted by our photos, are breaking depth records. 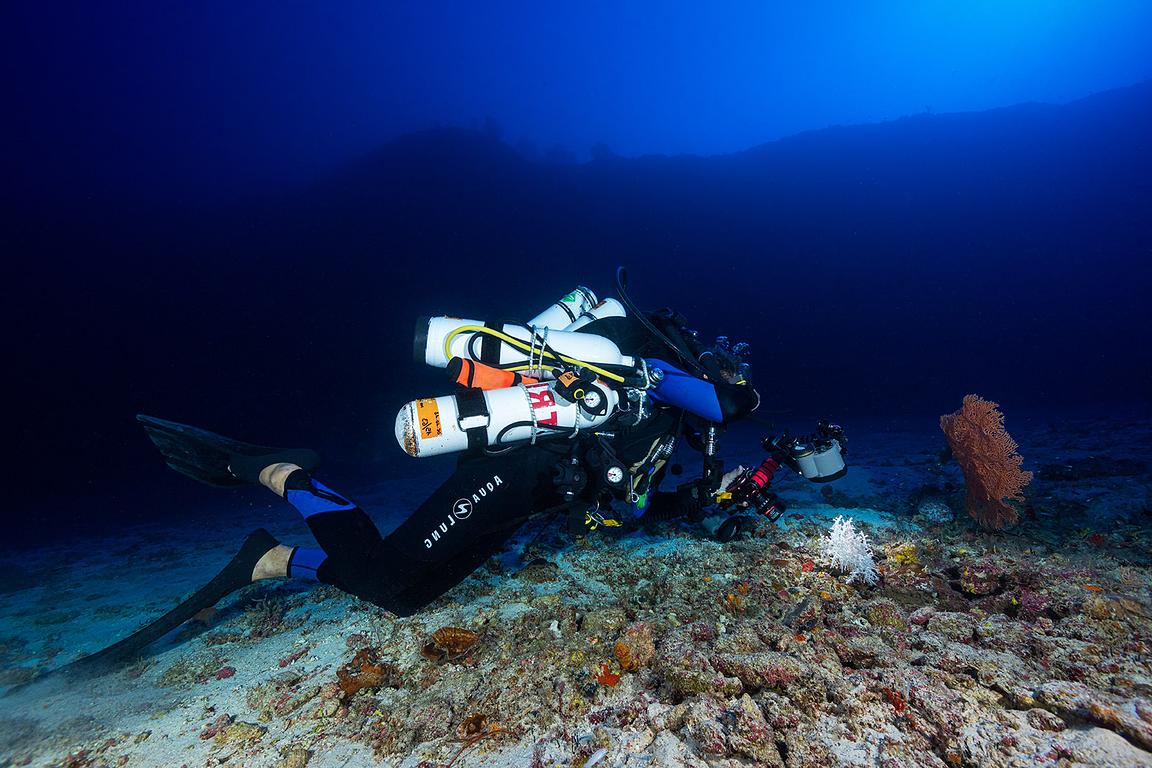 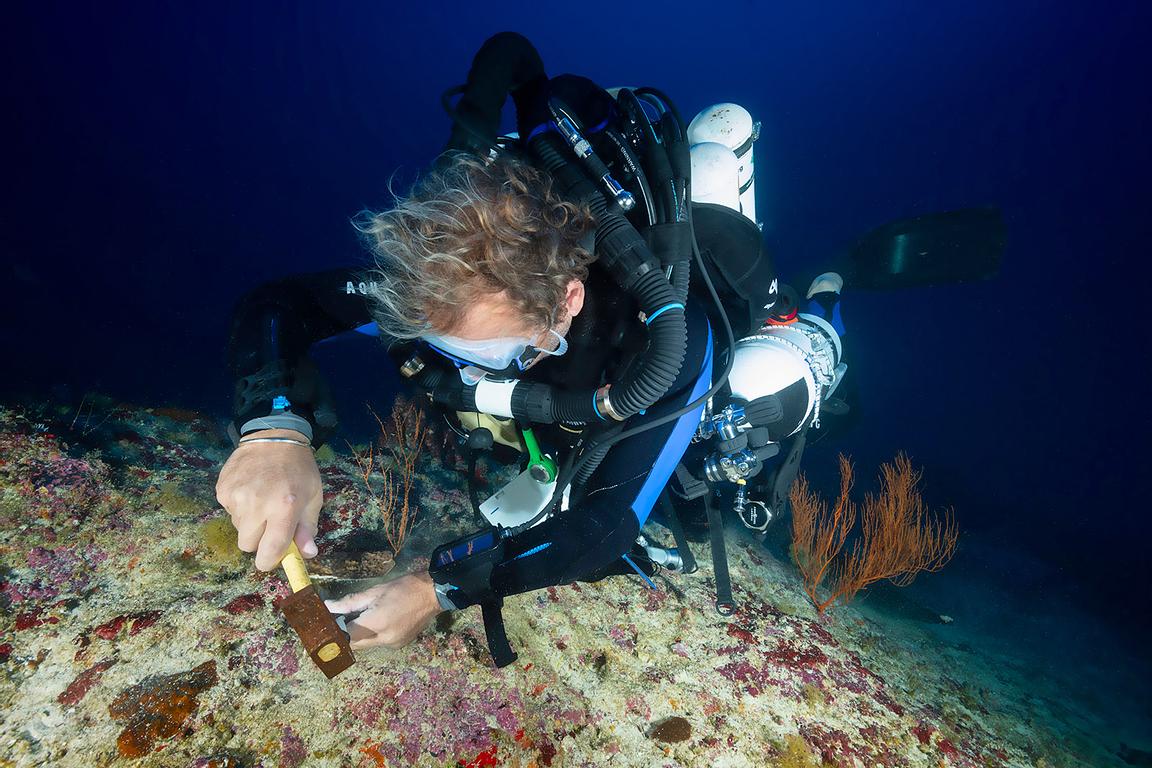 When identification from our photos is not possible, or a subject is of particular interest , we follow a strict sampling protocol developed by the scientific team. Each sample is targeted and follows a request from a scientist. Several analyzes can be done in the laboratory, in particular molecular biology analyses. 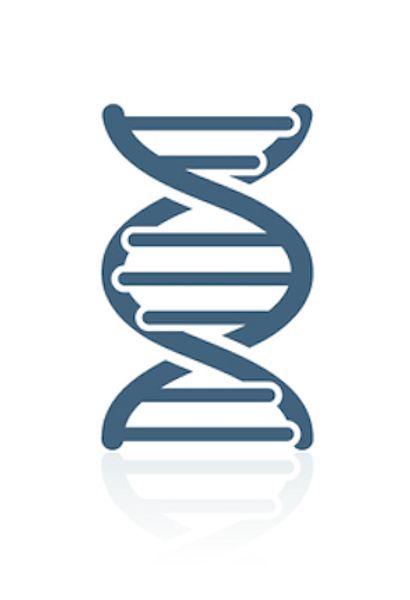 Transects and panoramas are valuable sources of data for the scientific community studying the flora and fauna of deep reefs. They enable the reconstitution of a fairly accurate image of the reef or sections of it. Thanks to these very high definition images, it is possible to count, to estimate the density and the distribution of the different species inhabiting mesophotic reefs.

The panoramas and transects are periodically renewed in order to monitor their evolution. Due to their depth, chronological follow-ups in the mesophotic zone are very rare.

Coral bleaching events have unfortunately become common occurrences at shallow depths and are therefore followed worldwide. However, during our immersion we were able to observe bleaching of certain colonies of deep coral species, a phenomenon that is poorly documented due to the great depth. Returning regularly to certain stations, we monitor this phenomenon and carry out an almost weekly monitoring of mesophotic populations in Mayotte. At these depths, chronological tracking is very rare around the world. The information collected by DBE on this subject is virtually unprecedented and constitutes an important source of information for science. Undeniably, this is another strength of the association.